“What did the ghost teacher say to her class?”

“Look at the whiteboard, and I’ll go through it again…”

For most children, the main countdown after the summer holidays is for Father Christmas’ visit (to date, their wish list is on draft five… and our Christmas break to-do list on draft ten).

Although many would be happy to start on the Jingle Bells in June, we do need to at least acknowledge that there is another celebration between summer and winter – take a bow, Halloween, because you’re here to provide some light relief.

While facing the onslaught of Harry Potter dress-ups (why is nobody ever Ron?), it’s a good time to remind the class that, actually, J.K. Rowling didn’t invent witches and wizards.

Here’s our top spooky stories to entertain KS1 – but don’t worry, they’re not too spooky for your little ones.

When they had finished, the big skeleton said,
“That dog looks a bit funny to me.”
“So he does,” said the little skeleton.
“We’ve got his tail on the wrong end – and his head!”
“Foow!” said the dog skeleton.

Reading a book to your class that you, too, enjoyed as a child is one of teaching’s purest pleasures – and a few of us may have caught Griff Rhys Jones’ narration of the Funnybones series in the early 90s.

“Frog in a bog,
Bat in a hat,
Snap crackle pop,
And fancy that!”

There are a couple of famous Mogs on most primary school bookshelves, and the simple black linework of Jan Pieńkowski is not to be confused with Judith Kerr’s stripy silver tabby.

Meg & Mog is best delivered to EYFS classes, who will love exploring colours, sounds and shapes with this somewhat scatty duo.

3. Room on The Broom, by Julia Donaldson

Then out of the bushes on thundering paws
There bounded a dog with the hat in his jaws.
He dropped it politely, then eagerly said
(As the witch pulled the hat firmly down on her head),
“I am a dog, as keen as can be.
Is there room on the broom for a dog like me?”

The film adaption was nominated for an Oscar, and the theatrical version an Olivier award… but let’s not forget where it all began; a page-turner which entertains children just as well on the story mat as it does on the screen and stage.

Do any of the children have a similarly exciting lost-and-found story (mud monsters optional)?

4. The Witches, by Roald Dahl

“She might even be your lovely school-teacher who is reading these words to you at this very moment. Look carefully at that teacher. Perhaps she is smiling at the absurdity of such a suggestion. Don't let that put you off. It could be part of the cleverness.”

Although we couldn’t recommend the film for this age group, Dahl’s charm is far more enduring when the book is read aloud.

It is, however, best avoided if you don’t want the class to discover your secret…

5. The Hallow-Weiner, by Dav Pilkey

There once was a dog named Oscar who was half a dog tall and one-and-a-half dogs long.
Because of his unusual shape and size, all the other dogs made fun of him.
“Weiner Dog! Weiner Dog!” they called him.
And Oscar did not like it one bit.

Oscar is a sausage dog who gets dressed up in a bun by his mother for Halloween. We’ve all been there with the embarrassing costumes – but would anyone else be called a ‘hero sandwich’ after saving the day?!

We had to settle with ‘old bedsheet’!

6. Fungus the Bogeyman, by Raymond Briggs 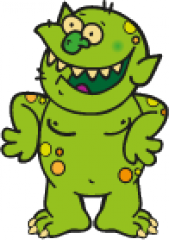 Made famous by the Snowman and his own take on Father Christmas, Briggs turns the tables with a bogeyman who’s experiencing an existential crisis.

Children will love his silly take on the gruesome; but give yourself a gold star if you can stomach a green smashed avocado sandwich afterwards.

7. The Worst Witch, by Jill Murphy

Everything about the school was dark and shadowy. There were long, narrow corridors and winding staircases – and of course there were the girls themselves, dressed in black gymslips, black stockings, black hobnailed boots, grey shirts and black-and-grey ties. Even their summer dresses were black-and-grey checked.

Forget Hogwarts – it all started with Miss Cackle’s Academy for Witches!

The descriptions in Jill Murphy’s time-honoured tale are especially fun. Could your class create a similarly spooky scene?

“And we both got SO hungry we couldn’t resist slurping from what we could find.
A dollop of jam would never be missed!
Or at least, we thought, you’d not mind.”

Ever chomped on a doughnut, only to find its delicious filling to be inexplicably absent?

Maybe it wasn’t a bumbling baker after all…

9. Winnie The Witch, by Valerie Thomas

You’re never too young to learn that pets should, ideally, not match your home furnishings.

A lot of cats have featured in this list, and you class might find it fun to compare the pictures. Black cats can look very, very different!

In what other ways could they be described?

Stellaluna is a bat who is separated from her mother and raised by birds. When she finds her family again, she learns how to be bat; and despite their lifestyle contrasts, she stays friends with the chicks.

As heart-warming as a pumpkin spice latte, Stellaluna is a timeless life lesson on difference, kindness and acceptance; appropriate for Halloween, or anytime.

After reading these spooky stories, your class could be inspired to create their own terrific tales – but grammar doesn’t need to be ghoulish!

Book on to the next webinar to discover how Mighty Writer can make a difference to your classroom.

Back to Listing<< PreviousNext >>

More Information About Mighty Writer For...

Some of the 1000+ Schools Currently Using Mighty Writer